Kakolem Beach is considered to be one of the most beautiful and isolated beach in Goa. This picturesque beach is located in the Canacona city in the South Goa district. It is also located at a distance of 31 km away from Margao city. Furthermore, this beach is also known as the “Tiger Beach”, and is popular destination for honeymooners due to its picturesque beauty.

How to Reach Kakolem Beach?

The closest major railway station is located in Margao. The Madgaon Railway Station is well connected to most of the major cities and towns in the country.

If you intend to drive to this beach, the ideal starting point would be Margao. There are two routes from Margao. They are as follows

The nearest airport is located in Dabolim at a distance of 65 km. The Dabolim or the Goa International Airport is well connected to major cities and town in the country as well as to major international destination.

Climate and best time to visit the Kakolem Beach

The climate this beach experiences during the summers which begins in March and ends in May is generally “hot and humid” with the mercury on an average rising to about 35 degree Celsius. The rainfall received during the monsoons is “heavy”. The winter which begins in December and ends in February are pleasant with the temperatures ranging from a maximum of 28 degree Celsius to a minimum of 21 degree Celsius. So the ideal time to visit this picturesque and pristine beach is during winters from December to February.

For many years this picturesque beach was deserted as a result of which there was no things/activities found in and around this beach. However, this beach has gradually become tourist hotspot due to the development of water sports activities such as water-biking, paragliding, angling, fishing etc.

Also Read: WHAT MAKES CAVELOSSIM SUCH A DELIGHTFUL GOAN BEACH? 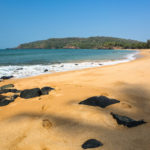 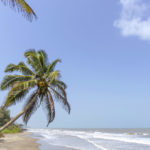