In between Udupi and Mangalore lies an extremely scenic beach called Kapuor also referred to as Kaup. This picturesque beach is known for its pristine environment. In addition, this beautiful Kapu beach is also said to be home to a lighthouse that was supposedly built during the year 1901. Furthermore, this beach also comprises of small shacks/eateries that serve delicious local cuisine.

How to Reach Kapu Beach?

The closest major railway station to this beach is located in Mangalore. The Mangalore Railway Station is well connected to major cities in the country such as Chennai, Mumbai etc. Alternatively, the Udupi Railway Station can also be used.

If you intend to drive to this beach then the ideal starting points would be Mangalore, Bangalore,Udupi, and Coimbatore.

There is one route from Mangalore and it is via NH-66.

There are two routes available from Bangalore and they are via NH-75 and NH-275.

There is one route available from Udupi it is via NH-66.

There are three routes available from Coimbatore they are via NH-275, via NH-66, and via NH-75.

Climate and the best time to visit Kapu Beach

There are a few things/activities to do found at this beach. They are as follows

There are a number of shacks located on this beach that provide for delicious local cuisine worth trying.

A lighthouse built in the year 1901 open to tourists during certain periods in the day is a major attraction located on this beach. This lighthouse provides for magnificent view of the entire seashore.

3. Ruins of the Jain Basadis:

The ruins of Jain Basadis that can be found at this beach are also a definite worth visit. 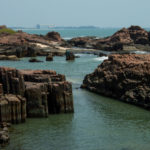