Maintained by the “Panambur Beach Tourism Development Project” is the picturesque Panambur Beach located in Mangalore in Karnataka. This scenic beach is located at a distance of 10 km from Mangalore city. Apart from possessing scenic beauty this beach is also known for its pristine environment. In addition, activities such as jet ski rides, boating, dolphin viewing etc are available at this beach. Furthermore, this beach is extremely well maintained as a result of which it is popular and attracts a large number of tourists.

How to Reach Panambur Beach?

There are three routes that are available from Udupi, they are via NH-66, via Karkala-Padubidri Road and NH-66, and via SH-67 and NH-66.

There are two routes that are available from Bangalore they are via NH-75, and via NH-275.

There are three routes available from Mysore they are via Mangalore-Mysore Highway, via NH-75, and via NH-66.

There are three routes available from Coimbatore they are via NH-275, via NH-66, and via NH-75.

Climate and the best time to visit the Panambur Beach

There are number of things/activities to do found in and around this beach. They are as follows

This beach is renowned for water related activities such as jet ski rides and boating. In addition, this beach is also popular for dolphin viewing.

An international kite festival is organised by a group of kite fanatics called “Team Mangalore” at this beach which is extremely popular. This festival includes participants from countries such as England, France, Netherlands, Kuwait, Thailand etc. Furthermore, this festival is usually sponsored by corporate giants such as ONGC, MRPL etc.

A three day beach festival known as “Karavali Festival” which when literally translated means “Coastal Festival” is organized at this beach by the Dakshina Karnataka administration. During this festival many stalls are put up at this beach for exhibition. In addition, dance and singing competitions are also held on all three days of the festival. 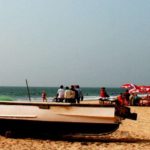