According to the “Outlook” magazine, a scenic beach in Karnataka called Maravanthe Beach is among one of the most beautiful beaches in the country. This picturesque and pristine beach is located in the coastal town of Kundapur. It is also surrounded by the Arabian Sea on one side, and the River Sauparnika on the other side. In addition, it is renowned for its calm sea and beautiful palm trees that surround it.

How to Reach Maravanthe Beach?

The nearest railway station to this beautiful beach is located in Kundapur itself. The Kundapur Railway Station is well connected to major cities in the country.

If you intend to drive to this beach then the ideal starting points would be Bangalore, Mangalore, Udupi, Honnavar, and Shimoga.

There is one route available from Mangalore, and it is via NH-66.

There is one route available from Udupi, and it is via NH-66.

There is one route available from Honnavar, and it is via NH-66.

Climate and the best time to visit Marvanthe Beach

Since this beach has not yet been developed into a major tourist hotspot there are not many things/activities to do found on this beach. Although there is one major attraction located at this beach, and it is as follows

A temple called “Maraswamy” and consisting of three “garbhagriha” wherein three deities are worshipped. One of the deity worshipped over here is Varsha i.e. wild boar. In addition, marine animals such as tortoise, crocodile, and fish are also a part of worship at this temple as depicted by rock drawings found in the premise of this temple. 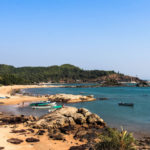