Renowned for beautiful lagoons is a picturesque and pristine beach in Lakshadweep known as Kadmat. This beautiful beach is located in the Kadmator Cardamom Island. Apart from its scenic beauty this beach is also known for colourful corals and reefs. In addition, this beautiful beach also comprises of crystal clear blue sea water which possesses a rich marine life, thereby making it ideal for scuba diving.

How to reach the Kadmat Beach

There are number of direct cruise services from cities such as Mumbai, Chennai, Cochin, and Vishakhapatnam.

The nearest railway station to this beach is located in Kochi. The Kochi Railway Station is well connected to most major cities in the country.

The nearest airport located to this beach is at the Agatti Island which is connected to the Kochi Airport. The Kochi International Airport is well connected to major cities in the country as well as to international destination.

Climate and the best time to visit Kadmat Beach

There are few things/activities to do found in and around beach worth exploring. They are as follows

A museum called “Golden Jubilee” is located in close proximity to this beach i.e. Agatti Island and consists of a variety of archaeological and culturally significant artefacts. In addition, this museum also consists of two artefacts related to Lord Buddha.

A beautifully constructed mosque known as Mohiyudeen is located in close proximity to this beach. In addition, this mosque which is supposed to have built in the 16th century possesses an architectural style that is similar to the Malabar Temple, thereby making it unique.

There are a number of water sports such as scuba diving, parasailing, kayaking, and snorkelling that are available at this beach for tourists to enjoy. 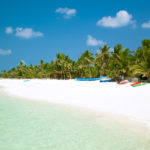