Renowned for possessing a 35 feet high rock formation called “Bahman Ghal” is a picturesque beach in Maharashtra called Hedvi Beach. This secluded beach is located in a village called Hedvi in the Ratnagiri district. This beach is known to possess “black sand” and is situated in an isolated area. In addition, this beach is surrounded by coconut trees which help add more charm to its scenic beauty. Furthermore, this beach is known to be “paradise” for motor bike riders.

How to reach the Hedvi Beach

If you intend to drive to this beach the ideal starting points would be Kolhapur, Mumbai, Pune, and Belgaum

There are three routes from Kolhapur to this beach, and they are via NH-166, via NH-48 and Karad Chiplun Road, and via NH-66.

The closest major airport to this beach is located in Mumbai, The Chhatrapati Shivaji International Airport is well connected to major cities in the country as well as international destinations.

Climate and the best time to visit the Hedvi Beach

There are few things/activities to do found around this beach. They are as follows

Located in close proximity to this beach is a rock garden comprising of colourful, decorative flowers, and trees.

A 30 feet lighthouse is located in close proximity to this beach. This lighthouse which was supposed to have been rebuilt in the 1960 provides for magnificent panoramic view of the surrounding area.

A temple called Shri Dashbhuj Lakshmi Ganesh dedicated to Lord Ganesh is located around this beach. This temple was built by the Peshwas apparently using Kashmiri white marble. In addition, the idol found in this temple is about three feet in height. Furthermore, this temple is extremely popular and attracts many devotees.

The sea surrounding this beach is not safe for swimming hence swimming over here is not recommended. 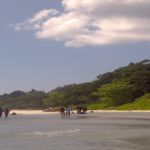