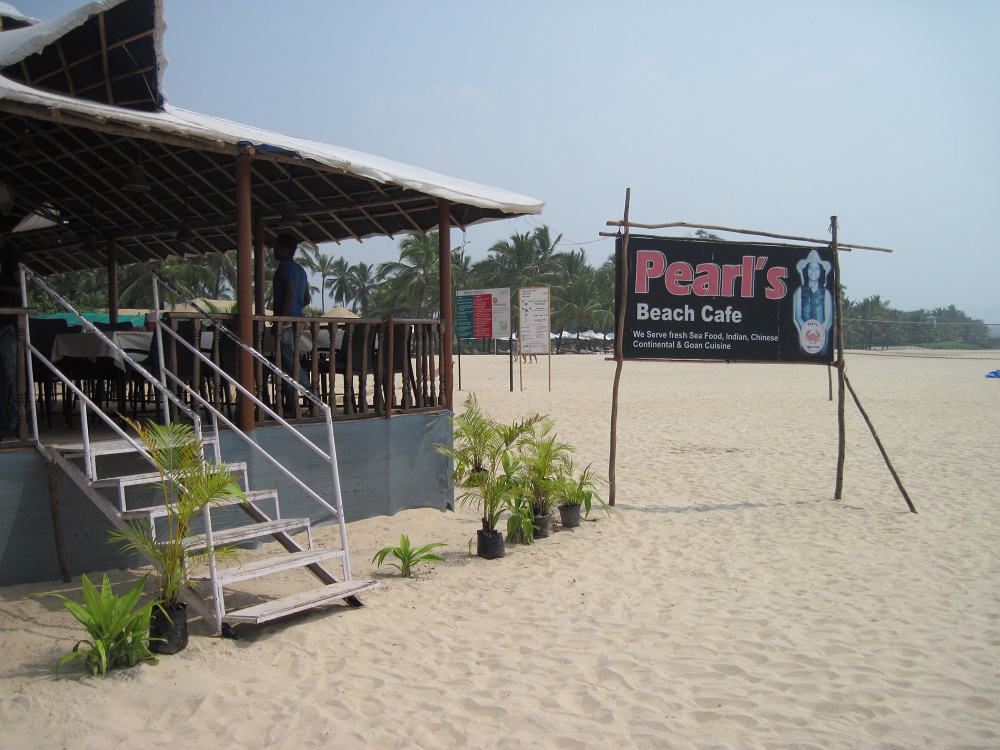 “Tranquility” is what I experienced while eating a plate of French Fries and a soft drink in a shack called “Pearl’s Beach Cafe” located at the beautiful Cavelossim Beach. Situated in South Goa this shack popular for its seafood is surrounded by sparkling golden sand and the clear blue sea water. Having been impressed by its ambiance,  I decided to obtain some relevant information about this shack. And so I approached the manager, who in response to my request for an interview offered me a card of Mr. Cruz Cardozo, the owner. Furthermore, I  then immediately spoke to Mr. Cardozo who agreed for a chat, provided I waited at the shack for about half an hour. It was eventually after about 45 minutes that I finally managed to chat (over a generously offered free beer) with the owner . So, presenting below are few important facts (extracted from the conversation) that one needs to know about this wonderful beach shack. 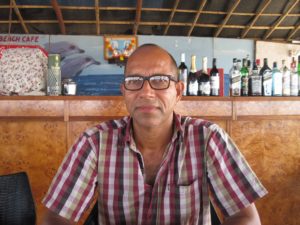 1. The “Cuisine” served and rates offered at the Pearl’s Beach Shack: 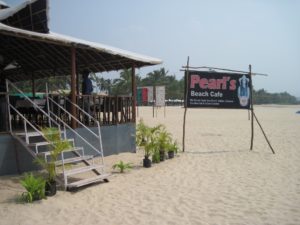 The entrance of the “Pearl’s Beach Cafe” located at the Cavelossim Beach (Source: AskGalore)

“Seafood in terms of cuisine” says Mr. Cardozo is the specialty of this beach shack. With regards to the other types of cuisines Cardozo says that “Indian, Continental, and Chinese are also served at this shack”.  Furthermore, the Pearl’s Beach Shack provides options for both vegetarian as well as non-vegetarian eaters. When asked what delicacy in seafood cuisine is extremely popular he replied that “Garlic Butter Crab is consumed the most by customers”. In addition, when asked about the cost of the delicacy he said that “It depends on size of the crab and can range from a minimum of Rs 400 to a maximum of Rs 2000”. Probing further, I ask what would be the appropriate cost for a one man meal,to which he replied that “A decent meal for a man would cost about Rs 600-Rs 770. However, it must be noted that a few delicacies could be more expensive than the rate mentioned on the menu card depending on the size of the fish.  In terms of starters/appetizers the average minimum cost is about is about Rs 400.

2. The type of “Drinks” served and the rates offered at the Pearl’s Beach Shack:

Now, apart from the “food” served at the Pearl’s Beach Shack, the alcoholic beverages available over here also comprises of a major component. So, when asked about the types of drinks available Cardozo says that “Beverages such as beer, whisky, and a Goan local drink called Feni are served at this shack”. In addition, he further states that in terms of beer a “pint” is usually sold at about Rs 60 to Rs 80, while a 750 ml bottle known as “quartz” is sold at a range of about Rs 100 to Rs 120. As for whisky, he says that both international and national brands are sold at this shacks. Some of the international brands available include Chivas Regal, Black Label, and Jack Daniel.  On the other hand the national brands include Vat 69, Royal  Challenge, and Teacher. As for the prices, while a 60 ml glass of Chivas Regal costs about Rs 400 to Rs 500, a 60 ml glass of Royal Challenge cost about Rs 70 to Rs 120. The local Goan alcoholic beverage “Feni” (found in most beach shacks in Goa) is also served over here at a cheap price of Rs 50 for 60 ml. Other beverages served at the Pearl’s Beach Shack include mocktails, juices, cocktails etc with prices ranging from Rs 120 to Rs 450.

3. The “Best Season” for the Pearl’s Beach Shack and the type of tourists it attracts:

“November to February” is the period according to Cardozo that attracts a large number of tourists to this shack.  He also adds that “A majority of tourists that arrive during the peak season are either Russians or Europeans”. He also mentions that  due to the large influx customers belonging to Russia many of the waiters at this shack have been trained in the Russian language.  When I quiz him further about action witnessed during the non-season, he says “Since the Pearl’s Beach Cafe is a shack, it possesses a government license (as is the case for all shacks in Goa) that is valid till May 31st”. And so in other words from June to September (non-season) the shack is not operational.

4. The “Business” that the Pearl’s Beach Shack makes during the peak season:

As my rather relaxed conversation with Cardozo was approaching its climax I asked him (out of curiosity) about the business this shack makes during the peak season. To which he replied that “On a really great day as much as Rs 45k  could be made while, on average days Rs 10k to Rs 15k is generally made”.

Having personally experienced the food, service, and ambiance provided by this shack I can definitely say that if “a combination of great seafood, drinks, and serene environment” is what you desire, then the “Pearl’s Beach Shack” located at the Cavelossim Beach is the ideal place to visit. 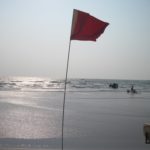 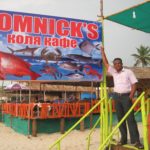