Commonly also referred to as the “Mahatma Gandhi Beach” is the scenic and pristine Kollam Beach located in Kerala. This picturesque beach situated in Kollam city was first inaugurated on 1st January 1961 by Zakir Hussain, the then Vice-President of India. It also apparently is supposed to be the first “Beach Wedding Destination” in the state. In addition, this beach is also one among the few beaches in the state that possesses a lifeguard outpost.

How to reach the Kollam Beach

The nearest railway station to this beach is located in the Kollam city at a distance of 4 km. The Kollam Junction Railway Station is well connected to major cities in the country such as New Delhi, Bangalore, Chennai, Jammu, Howrah etc.

If you intend to drive to this beach the ideal starting points would be Kottayam, Kochi, Thrissur and Thiruvananthapuram.

There is one route via Thiruvanthamapuram to this beach, and it is via NH-66.

The nearest airport is located in Trivandrum at a distance of 68 km. The Trivandrum International Airport is well connected to major cities in the county as well as to international destination.

Climate and the best time to visit the Kollam Beach

There are a couple of things/activities to do found around this beach. They are as follows

This beach provides for magnificent views of the setting sun thereby making it an ideal spot for photography enthusiasts.

This beach is ideally suited for recreational activities such as volleyball, football etc.

The Tangasseri Lighthouse built in the year 1902 and standing tall at 144 feet is a major landmark located around this beach.

Remnants of 18th century Portuguese/Dutch forts churches are located around this beach. These historic monuments are worth a visit for all those tourists who visit this beach. 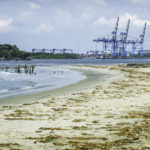 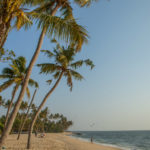