Considered to be among the “most secluded beaches” in Kerala is the picturesque and pristine-Kiz Unna Beach. This beautiful beach is located in the northern part of the state in the coastal town of Kannur. Additionally, since this beach is located in close proximity to the Ezhara beach it is commonly referred to as the “KizhunnaEzhara Beach”. Furthermore, this beach comprises of black rocks and crimson coloured riffs.

How to reach the Kizhunna Beach

There is one route from Udupi to this beach, and it is via NH-66.

There are three routes from Coimbatore to this beach, and they are via Kozhikode-Malappuram-Palakkad Highway, and NH-66, via NH-66, and via NH-544 and NH-66.

Climate and the best time to visit Kizhunna Beach

Since this beach is located in an extremely secluded spot and has not been developed there are not many things/activities found in and around this beach that are worth exploring. Although a few basic activities such as sunbathing, swimming, walking etc are frequently carried out at this beach. 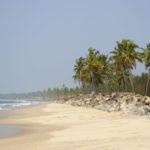